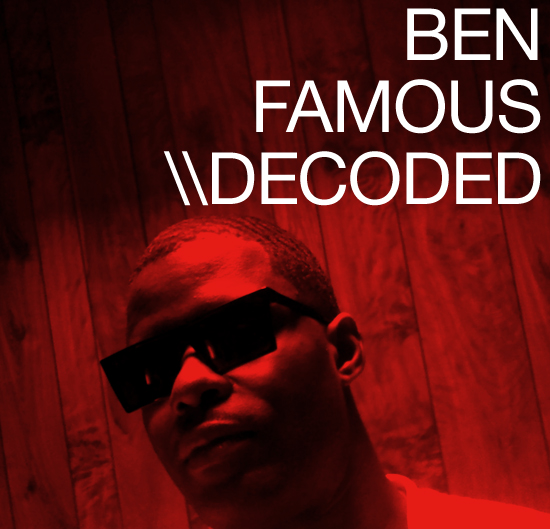 Lets break down some bars from the Forthcoming #MEGATRONBOMBS with Mr. Box Beats…aka Ben Famous.

Decoding the bars: I was talking to my immediate circle of friends who are coping with all types of tragedy and loss, motivating them. No excuses.

“This was during a period where, we lost good people. Everyone around me was feeling so negative and hurt. My tightest associates were feeling lost, like nothing mattered anymore. So when my pen hit the paper around that time…when I wrote or freestyled…I was mainly trying to build my people back up. Myself included.”

Lyrical Excerpt: “I ain’t even gotta say she bad/ she like my own version of Stacey Dash/ She got my brand new tape in her Macy’s bag…”

Decoding the bars: To the dudes where I’m from…Stacey Dash is like Kate Moss. She’s iconic.

“My man Dirty Kleen gave me this beat*, so I basically felt like I had to do something major with it. My heart told me that you have to go in about women, the beat is asking for that, but I wanted to add a twist. So I took the opportunity to mix one of my favorite ladies in with some of my smoothest bars. The song isn’t all about Stacey Dash personally, instead its more about that type of girl. Around the way, but untouchable cus she’s so fly.”

Lyrical Excerpt: “Vanilla sunsets, pine floors, hardwood decks/ but fantasize on when we played the steps…”

Decoding the bars: I always wanted a home designed by Frank LLoyd Wright, but honestly nothing will be more home, than where I grew up.

“I make it known that I want to come up, be a star. On the flip side, I’m always gonna wish it was simple again, like when I was a kid and we would all gather around the stoop, ridin’ bikes and chasin’ girls.”

Decoding the bars: This is all slang for success, sometimes you can’t be transparent with your lyrics. You have to paint a picture that makes the same point. It’s fun to be complex but simple in this manner.

“I look forward to things openly. So in my rhymes, you can hear a lot of wishful thinking.  I was basically foretelling the fruits of my labor. Award show appearances, rubbin’ elbows with the stars we always watched on the screen.  Picture how live it would be for Box Beats to be on your TV screen opposite of Vanessa Williams. Wow.”